Job creation, not reservation, is the antidote for the unemployment crisis

The resurrection of the caste census demand exemplifies how the political class flogs tired old ideas in response to contemporary socio-economic and political challenges. With Census operations beginning, Bihar and Maharashtra legislative assemblies have pressed for counting caste numbers. On a parallel track, the Justice Rohini Commission for sub-categorisation of OBCs has sought data from the UPA-2 era socio-economic caste census to fine tune its recommendations. Centre hasn’t shown any interest in either claim and rightly so.

The political demand for caste census rests on hopes of resurrecting identity politics centred around greater reservation for OBCs. Amid the ongoing economic slowdown, pro-reservationists are ignoring the diminishing returns from quotas with the job pie shrinking. Rather than frittering energies on maximising quota benefits for caste groups, politicians should focus on employment generation through economic reforms and quality education. Such efforts collectively lift the whole population from poverty. Unfortunately, another election year in Bihar is leading to duels between JD(U) and RJD over the caste card.

With religion playing out strongly in Indian politics many of today’s jaded opposition politicians want caste to become the trump card again. But that moment has passed by. After two decades of Mandal implementation many OBC groups paused to wonder how they benefited, sending Lohiaite parties into a tailspin. Reserving jobs for locals is another populist stunt. BJP hasn’t done much better with a sub-categorisation card, for which the Justice Rohini Commission was hurriedly trotted out and then left hanging. The slicing and dicing of voters, jobs and higher education is furthering social divides with grievances fast reaching a breaking point. Votaries of reservation are mistaken in believing that strength lies in caste numbers. No quota policy can sate even a small fraction of today’s mushrooming army of unemployed youth. Talk job creation now, reservation has had its day. 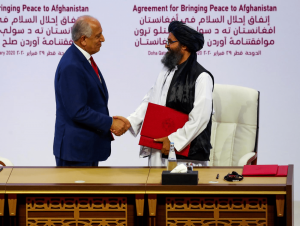 In a significant development for Afghanistan, the US and Taliban have inked an agreement that is being seen as a precursor to peace in the war-ravaged country. The US has announced a troop withdrawal schedule in exchange for Taliban providing guarantees that Afghan soil won’t be used for terror attacks. Plus, things will now transition to intra-Afghan talks between Taliban and various Afghan stakeholders that would have to necessarily include the Afghan government. If all goes well, all foreign troops will pull out in 14 months.

Thus, the US-Taliban deal is actually a precursor agreement and the long road to Afghan peace begins now. It’s clear that Taliban will be part of Afghanistan’s future. The only question that remains is how much influence the radical group will come to wield. In such a scenario, it would be prudent on India’s part to cultivate ties with Taliban. However, New Delhi must have a fallback plan in case the current Taliban is anything like the old Taliban, and works in concert with Pakistan to support anti-Indian jihadi groups. It’s worth bearing in mind the deputy leader of Taliban is Sirajuddin Haqqani – a man with close ties to Pakistan’s ISI. After the US withdrawal, Islamabad could exert influence to direct extremists towards India.

On top of this the US withdrawal – particularly if it’s a precipitate one – will be perceived as a defeat of American power and could boost radical groups across South Asia. This is bound to worsen India’s external security environment. In the worst case scenario India could confront a China-Pakistan-Talibanist Afghanistan alliance. In view of this India must beef up defences along its borders, particularly in Kashmir.

This is also why having a religiously polarised domestic atmosphere is a major national security risk. The recent riots in Delhi have seriously scarred our social fabric. It needs to be quickly repaired and communal harmony restored so that enemies of this country can’t fish in troubled waters. Already there are reports that images from the Delhi riots are being used by the Islamic State terror group to call for retaliatory action. This can only be countered through boosting inter-community harmony, holding rioters accountable no matter what religion they belong to, addressing police apathy and acting against BJP leaders who incite violence through hate speech. Tough times are ahead and the country must come together.

Can Coronavirus Cause A Recession ?

Contagion generating unusual fear in markets, which are now big enough to disrupt the global economy

Ruchir Sharma , [The writer is an author and  global investor.] 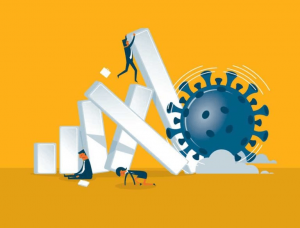 The big surprise was not that global markets fell sharply last week on fears of the coronavirus, but that it took so long for them to wake up to the threat. Before last Monday, Wall Street was full of instant experts in epidemiology predicting – on the basis of widely circulated charts showing the number of new cases had peaked in China – that “it’s over”.

Global investors had been anaesthetised by a US bull market that is now 11 years old, the longest in history, and also one of the calmest. In the past decade, US stock prices approached a full 20% “correction” only twice, and suffered even minor dips much less frequently than in most previous bull markets. Even insignificant market tremors were met with new offerings of easy money from the Federal Reserve, so every dip was greeted as reason to buy. No global crisis seriously rattled the market.

Until last week, Wall Street was unusually blase about the coronavirus too, and had reacted with far less alarm than it did during the eight most recent global health contagions, going back to the Asian Flu in 1957. When fears of the coronavirus first appeared in January, the buzzword on Wall Street was “melt-up”, suggesting that stocks could rise as fast in 2020 as they normally fall in a meltdown.

The coronavirus was dismissed as a small cloud in an otherwise clear economic sky. The global economy was in an upswing. The threat of a trade war between the United States and China appeared to be ebbing. Even the rise of Bernie Sanders, a socialist candidate for the presidency, stirred no alarm for investors who, surveys show, give President Donald Trump an 80-90% chance of re-election.

Last Monday, the calm was suddenly broken. Amid reports that the coronavirus was spreading from China across Asia, into Europe and threatening the US, markets started falling sharply all over the world. By the end of the week, all the major markets had suffered drops of 10-15% from their recent peaks. Compared to its response at a similar stage of the eight previous global contagions, the market reaction had gone suddenly from unusual calm to unusual alarm.

Before last week, the markets had taken comfort from the relatively mild economic impact of previous contagions. Typically, they were accompanied by a sharp but brief slowdown, lasting around three months, followed by an equally abrupt recovery. The thinking was that in six months, the whole scare would be over.

What this episode reminds us, however, is that while markets are often a good barometer of economic conditions, this is not an economic event. Epidemiologists are still struggling to figure out the path of this virus and the investment community doesn’t know better. Financial analysts are quick to parrot headline commentary, like about how the virus will die when the weather turns warm in April, without having any real insight.

Moreover, many analysts are tracking the average impact of contagions in recent decades, and over that period the size of markets has exploded relative to the economy. In 1980 the total value of financial markets was about the same as total global economic output, now it is four times larger. While the worry used to be that tremors in the economy would rattle the markets, it is now possible that tremors in the markets will disrupt economies.

It’s increasingly difficult to read the mind of this bloated market beast, and that puts the world into entirely uncharted territory. In the postwar period, recessions have been triggered by central banks tightening interest rates, or oil price shocks, never by a virus. But now, the transmission channel has changed. The virus has the potential of inflicting great damage on the markets if the fear psychosis intensifies, and the markets have unprecedented potential to inflict damage on the economy.

Assuming markets don’t go into a tailspin, the economic impact of the virus this year will vary from nation to nation, depending on how much stimulus the government can afford. Investors are confident that Beijing will spend whatever it takes to keep China’s economy moving, and that the Fed will provide enough easy money to keep growth alive in the United States. High in the at-risk category: Italy and Japan, both hard hit by the coronavirus, and hard pressed to fund new stimulus measures.

Whatever course the coronavirus takes, it is already accelerating de-globalisation, which began when countries turned inward after the global financial crisis of 2008 and cross-border flows of people, goods and money slowed. Fear of contagion is likely to deepen the conviction of populist politicians who want to block imports and immigrants anyway.

The trend towards localisation – companies looking to produce more locally, and consumers looking to buy from local brands – is likely to pick up speed. The roster of manufacturers who are moving factories out of China, in search of lower wages and a less risky business environment, will grow.

The longer the virus lasts and the farther it spreads, the bigger these impacts will be. Hopefully, history repeats itself and like other epidemics this one too peaks and passes quickly. But one thing the coronavirus has already shown is that the market is a fickle beast and its daily medical opinions need to be read with caution.

The US-Taliban peace deal signed on Saturday will allow US President Donald Trump to check the box on his 2016 campaign promise of bringing American troops home. The deal is cause for concern for India. The legitimacy and the clear pathway to a share in power given to the Taliban will mean that Pakistan is now free to focus on its eastern borders. Beyond this, the peace deal represents a ‘surrender’ — the peace deal gives the terrorist Taliban international legitimacy, signals a win for jihadism, and a boost for Islamists and extremists.

The deal entails reduction in US troop numbers from 14,000 to 8,000, in 135 days. For its part, the Taliban is to sever all ties with al-Qaeda and its affiliates (the Haqqani network is instrumental in Taliban leadership), begin dialogue with the elected Afghan government, opposition and civil society, and end all violence. The Taliban does not recognise the legitimacy of the current government. It wants a reset, to return to an emirate with stringent Islamic laws. The crisis in the Afghan Unity Government with former Chief Executive Abdullah Abdullah questioning President Ashraf Ghani’s election and threatening to form his own ‘inclusive’ government complicates the situation. The gains made over the last 18 years, be it the institutions of democracy or in human and women’s rights, are at risk. India must support the constitutional and elected Afghan government to ensure that gains of the last two decades are not lost.

New Delhi must expect a rise in Pakistan-sponsored terror activities in India. While the implications of the deal for the region and India would have been discussed during President Trump’s visit, New Delhi needs to continue to remind the international community of the dangers of taking its eyes off Afghanistan.